Endemics, Undemics, and Everything in Between

My wife and I just returned from a week in Mexico and needless to say, I couldn't resist doing a little birding.  Of the seven days, four were assigned to birding and touristing, and only a couple to lounging at the resort in Cancun.


I had a big list of targets and high expectations when we landed in Cancun on March 31, and was greeted at the airport by two old friends from Costa Rica, Great-tailed Grackle and Gray-breasted Martin.  As we landed late, those were my only two birds of the day, and darkness found me without a lifer to start the trip with.  No matter, packing a new a camera and a lens I stole from Jeremy G, I was ready for the week!


After waking up to Brown Pelicans, Magnificent Frigatebirds, and Laughing Gulls the next morning we took advantage of the resort, and spent a few hours exploring the Hotel Zone.  My first two lifers showed within seconds of each other, as we added Tropical Mockingbird and Black Catbird.  Shortly behind them were Vucatan Vireo, Yellow-Green Vireo, Tennessee Warbler, and Prothonotary Warbler.  The entire trip was a nice blend of Yucatan endemics, partial endemics (or, undemics as I have been calling them), southern species, and North American migrants. 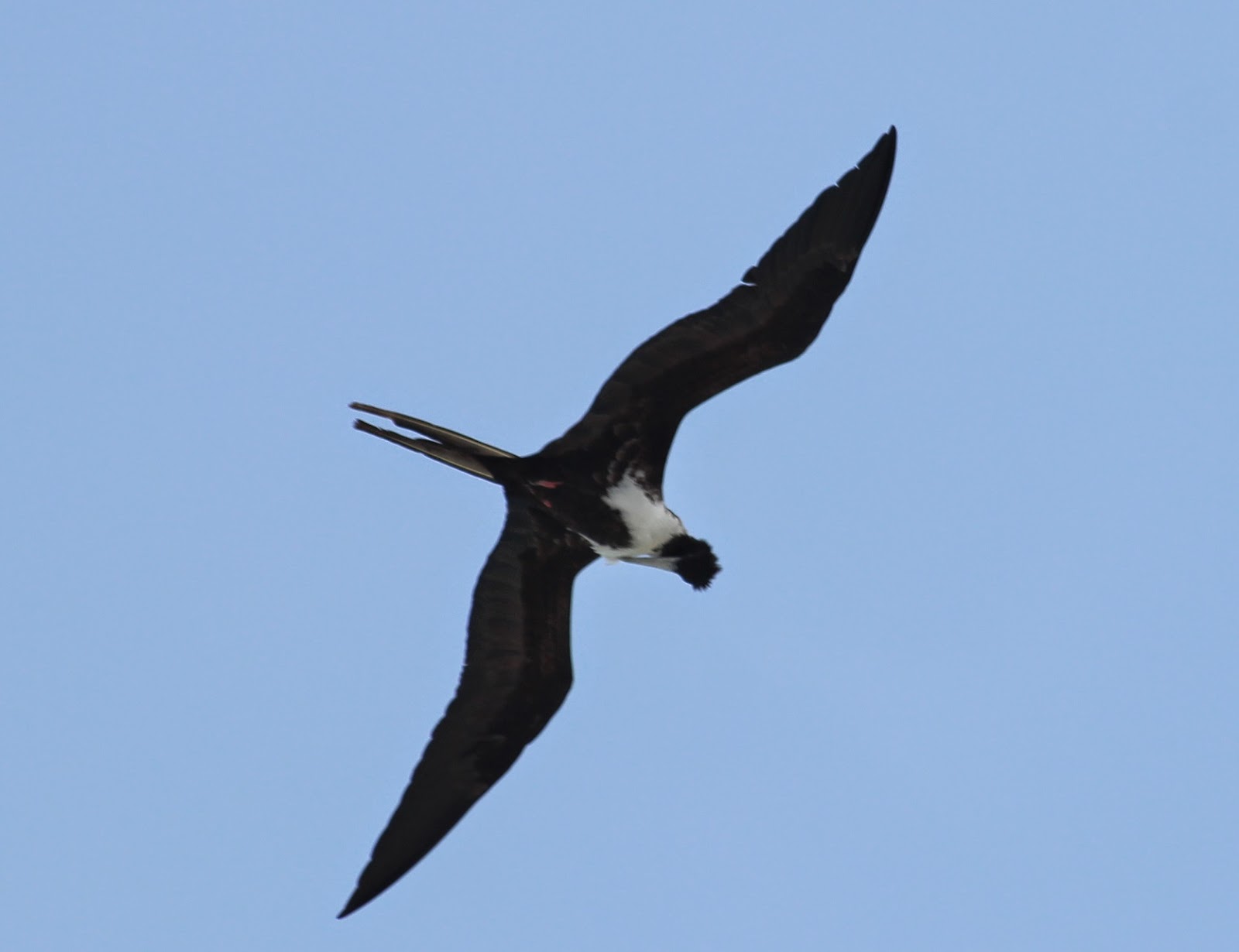 Our second full day in Mexico was a day trip to Isla Cozumel.  I had a car rented, a number of areas to check out, and three target species.  Unfortunately the car pickup took longer than we thought it would and the lack of road signs contributed to less birding time than we had expected, but the main spot I had in mind, an abandoned subdivision south of town, delivered for us.

The first bird to show was perhaps my most wanted bird, Western Spindalis.  Immediately following that sighting, we had great looks at the distinct Cozumel subspecies of Blue-Grey Gnatcatcher, though none of my pictures turned out well.

Another endemic, Cozumel Emerald, was frequenting the garden of one of two actual houses in the subdivision: 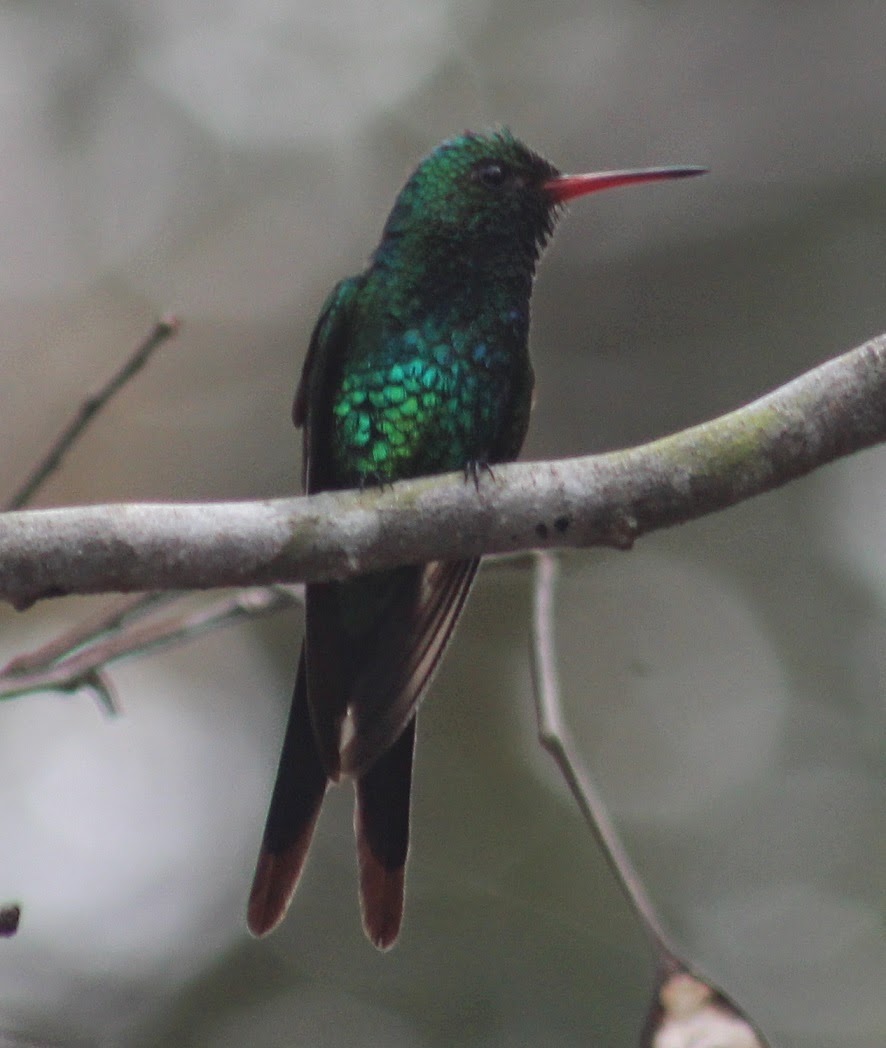 While on Cozumel, we also added Yucatan Woodpecker, White-crowned Pigeon, Yellow-faced Grassquit, and Caribbean Eleania.  We missed Cozumel Vireo, so I will need to go back at some point, but there are definitely worse places to go to!

The next three days were the bulk of birding, as we picked up our second rental car at Cancun Airport in the early morning, and headed off into the Yucatan.  Our plan was to spend some time at Chichen Itza before heading north to Rio Lagartos for an afternoon guided boat birding trip, guided land trip the next day before heading to Coba, then night in Tulum before working our way back to Cancun.

We threw in a couple of roadside stops on the way to Chichen Itza, which added lifer Mangrove Vireo, Plain Chachalaca, Yucatan Jay, Black-throated Green Warbler, Altamira Oriole, Black-headed Saltator, Black-crowned Tityra, and Lesser Yellow-headed Vulture.  Chichen Itza was spectacular for the scenery, but the throngs of vendors lining every path between ruins detracted a little.

The trip up to Rio Lagartos added White-tailed Hawk, but the wind was blowing when we arrived.  Our guide, Diego Nunez of Rio Lagartos Adventures, made the decision that we would be better off land birding without sacrificing birds.  We quickly added Mexican Sheartail, American Flamingo, Tri-coloured Heron, Mangrove Cuckoo, Black-headed Trogon, Great Black-Hawk, Zenaida Dove, and a few others.  I will save the photos for the end of the post.  Early the next morning, following a breakfast of croissants with ham and cheese, we headed back out and ran into some more spectacular birding.  Aztex (Olive-throated) Parakeet, Lesser Roadrunner, Ferruginous Pygmy Owl, Orange Oriole, Painted Bunting, Rose-throated Becard, Yucatan Wren, Common Black-Hawk, Gray-necked Woodrail, White-tipped Dove, White-bellied Emerald, Northern Parula, a Turquoise-browed Motmot colony, Carolina Wren, Grey-crowned Yellowthroat, Wood Stork, Limpkin, Green Jay, and more.

That afternoon we drove to Coba, where the ruins were also spectacular.  Green Vine Snake was one of the first highlights, but we added very few birds.  My lifer Masked Tityra was a nice add.    A night in Tulum followed, and we spent the next day working our way back to Cancun.  We added very few birds, but found Olive Sparrow and Yellow-lored Parrot north of Chemuyil, and  Gartered Trogon, Wedge-tailed Sabrewing, Yellow-throated Warbler, and Red-throated Ant-Tanager, the final lifer of the trip, at Dr Alfredo Marin Botanical Gardens.

The last day and a bit we spent relaxing at the resort and exploring the Hotel Zone, but didn`t add much else.

All in all, Mexico turned up 158 species, including 65 lifers.  Cancun turned out to be a great base of operations, and if only there weren`t so many other places to visit, I would go back in a heartbeat!  Now, for some more pictures!