If today had a theme, it was the weather.....  For simplicity's sake, and to cut down on my typing, feel free to automatically add "... and then it rained" to the end of every paragraph.

I have been itching to head out west for the last week or so, for a number of reasons.  Firstly, an incredible number of southern birds have been turning up along the Pacific Coast much more north than usual.  Secondly, the winds have been blowing onshore.  Thirdly, I have been watching the weather and crossing my fingers that the rain and fog would conspire to push something down and then keep it down.  Lastly, fall migration at Jordan River and points west is a magical time, worthy of much more attention and coverage than it actually receives.

The first opportunity for me to head out being today, my wife and I saddled up a little later than I had hoped and, after the usual Tim Hortons fuel up, headed first for Whiffin Spit.  It was fairly quiet on the spit until we found the Black Turnstone flock, which was very active and moving from one side of the spit to the next.  Quite quickly, my wife informed me that there was something different on the shore.  There stood the Pacific Golden-Plover that has been around for a few days.  Tick.  We added five more species of shorebird, Semipalmated Plover, Killdeer, Western Sandpiper, Black Oystercatcher, and Spotted Sandpiper, plus the female Bufflehead that has been around for quite some time, sitting on its usual log.  Not a bad start to the day!  Another coffee stop and off to Jordan.

I became a little discouraged as we drove into rain nearing Jordan, but reminded myself that I had pretty much asked for it.  I had visions of rarities dancing through my brain along the route.  Would I finally find my Rose-breasted Grosbeak?  Indigo Bunting?  Dare I dream of Asians?  The rain picked when we pulled into the gravel parking area in Jordan River, so I scanned the gull flocks... California, Mew, Glaucous-winged.... I'm sure I could have dug out a Herring had I the patience, but miraculously the rain stopped, and I crossed the road to my favourite three trees on Vancouver Island.  Small alders they may be, but they are an incredible migrant trap!

Finding nothing in the trees I circled around the back through the old WFP buildings.  Fox Sparrows were in numbers, and it looked like White-crowned Sparrows had had a banner breeding year.  There is a small clearing that opens up off the private driveway on the west side of this little patch, and I walked in there, drawn by the calls of Cedar Waxwings.  Immediately three birds flushed up in the blackberries.  Two more Fox Sparrows and a wait... what the hell is that?  The third set off bells, as it definitely didn't belong.  No sooner did I get a look than it disappeared in a flash of yellow-green.  No amount of pishing would draw it back out, and the waxwings and warblers had moved to the tree closest to the road so I circled back and met Thea, who had lost track of me.

Scanning intently into the tree I started counting the waxwings, which included a lot of young birds, and a few Yellow Warblers, when a different bird caught my eye, the bird which had played games with me a few minutes earlier.  Getting a fantastic look this time, I immediately noticed a longish, downcurved bill.  My first though was "Oriole-ish" and my second, "hey, you're not from around here, are you?"  A thorough look showed the bird to be slightly larger than the surrounding waxwings, with drab olive-ish uppers and uniform yellow-green underparts.  The bird sat upright and looked fairly slim, and the tail appeared long for the bird it was attached to.  Of course, my camera was in the car, and I sent Thea to fetch it while I studied the bird.  I had my suspicions, but would need Mr. Sibley to verify the potential lifer.  As soon as the camera was firmly in my hand the bird hopped into a very leafy part of the tree then took off east.  Another phrase familiar to birders was uttered at that moment, "Dammit, don't lose that bird, watch where it lands!"   Of course, we never saw it land.  It's long tail was apparent in flight as well as it headed east over the bay and disappeared into the trees on the other side.

Checking two different field guides back at the car, my suspicions were confirmed, a female/juvie type HOODED ORIOLE!  Not just a lifer but a spectacular one for Vancouver Island, Jordan River had done it again! 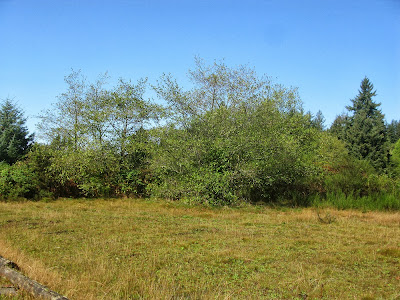 This small patch of trees has hosted 2 Lazuli Buntings and 2 Oriole species this year alone.
We hung around hoping for a return but none was to be seen, so we headed further west to Port Renfrew (and then it rained..).
The wind and rain were absolutely horrible between Jordan River and Port Renfrew, but again tapered off a little when we parked along the river and walked into the campsite.  Very few birds were to be found but we did have a Bonaparte's Gull, 35 Black Turnstones, and a Horned Grebe among precious few other species.  My main aim was to bird Botanical Beach, gateway to the open ocean and past host of such birds as Scissor-tailed Flycatcher and Lark Bunting.  The thick fog didn't deter us (it will keep the birds on the ground, right???) but no sooner had we started down the path than the rain became torrential.  I am definitely not a fairweather birder, but this had me running back toward the car, screw it!  Lunch and a dry off at Coastal Kitchen was most welcome, and we departed Port Renfrew still in the grips of a tropical style monsoon.﻿ 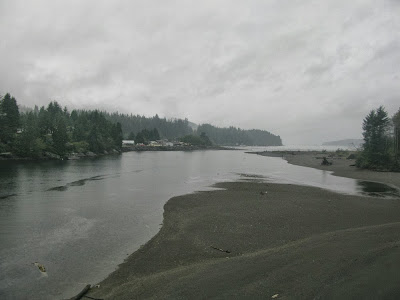 View from the bridge... maybe the rain will stop? 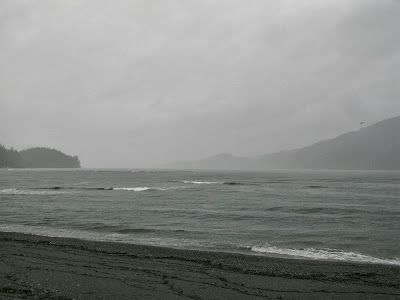 From the beach.... not exactly stellar weather.
﻿
Jordan was clear, sunny even, on the way back in but there were few new birds to be found.  A lone Greater Scaup was in the river, and Pacific-Slope Flycatcher and American Goldfinch made appearances.
We decided that since we were in the neighbourhood we would scan from Gordon's Beach and Otter Point in hopes of pelicans, shearwaters, or the like.  Again, it wasn't to be, and we settled for Common Murres, good numbers of Marbled Murrelets in their winter finery, and Pigeon Guillemots in their winter drabbery.  Many gulls were around as well, but nothing exciting.  Two gulls that looked very Western-ish were at Otter Point, but I suspect they were a couple of the usual, dirty mutts. 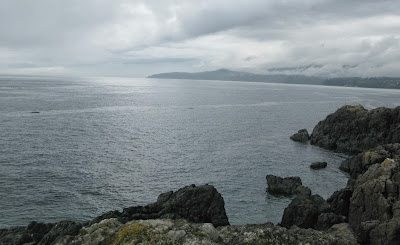 The grey weather continued, looking out toward Sheringham
Our last stop was Esquimalt Lagoon where we found very few birds but ran into Daniel D.  Good birding conversation is always a great way to end a day!
All in all, a great day out west, even considering the bone-chilling weather.  I can only imagine what else would turn up in Jordan River or Port Renfrew if more local birders took the time to visit!
Good birding,
Posted by Jer at 5:43 PM